Everyone who surfs knows that once you start, you can’t stop. Kelly Slater, in Dana Brown’s 2003 documentary, Step into Liquid tells us that, “once you’re a surfer, you’re done. You’re in. It’s like the mob or something. You’re not getting out.” Similarly, Beth Fehr, in her 2017 article “How Surfing and Traveling Feed the Same Addiction,” comments that, “it’s a quest which is not finite. So as hard as you try, as many places as you travel, and as many waves as you have the honor to feel beneath your heels, it will inevitably only deepen the desire to seek out more.”

In recent years, many technological advances have been made thanks to people who couldn’t overcome their desire to seek out more, to get out on the water anytime, anywhere, regardless of the weather conditions. Beginning with gas surfboards and evolving all the way through to the electric eFoil, athletes and engineers have gotten together and come up with ways to enjoy the water regardless of the swell.

Maybe that’s what brought you here today. If you count yourself among these surf addicts (like we do) and are looking to upgrade your waveless surfing experience by purchasing a self-powered board, you may want to take a look at the different options that are available for you today. There’s a hefty price tag on these toys, so the more you know, the more you can ensure you’re getting the most out of your ride, the better you’ll feel about your investment. We’ve put together a quick comparison of gas-powered surfboards, electric powered surfboards, and eFoils, so that you can easily choose the one that’s best for you without having to do a ton of searching. 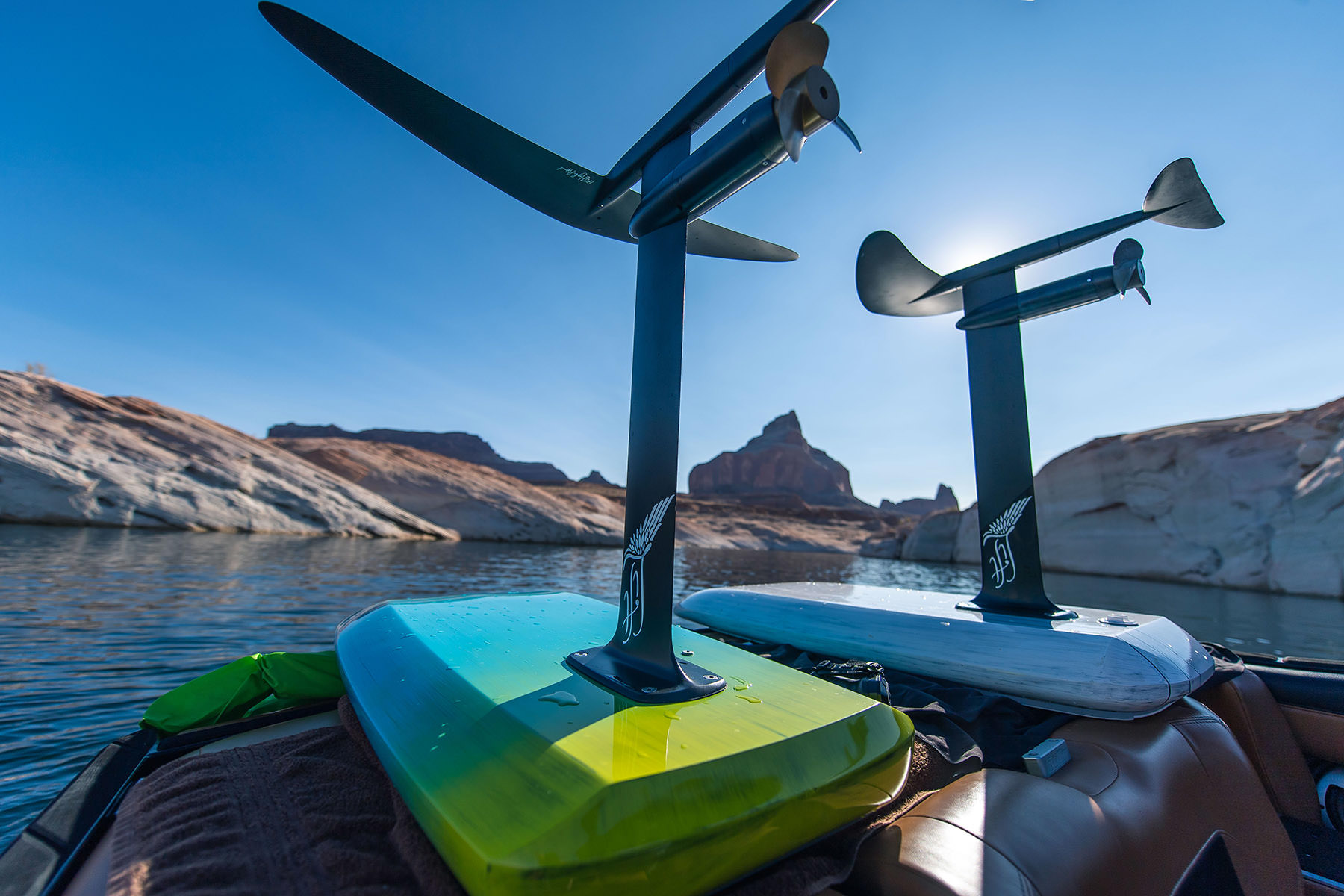 Part I: Quick Overview: What are motorized surfboards?

What’s a gas surfboard?
Gas-powered surfboards are made out of carbon fiber and kevlar and weigh between thirty and sixty pounds. They are propelled by a gas engine which sends water through a nozzle at the stern of the board. This provides the thrust and allows the board to reach speeds of up to thirty-five miles per hour. Movement and velocity are managed by a control handle that is attached to the board. Prices reach up to $19,000 for competitive models.

What’s an electric surfboard?
Electric surfboards are very similar to gas-powered surfboards but they use an electric engine powered by a battery-pack instead of fuel. Like their gas-powered predecessors, they are also made of carbon and other composites. They weigh between sixty and ninety pounds, are controlled by either a control handle or a wireless throttle, and also reach speeds of up to thirty-five miles per hour. Most start at about $10,000, but some models go up to $25,000.

What’s an eFoil?
An eFoil is a hydrofoil with an advanced lithium-ion battery that powers a silent electric motor that’s mounted on an all-carbon hydrofoil. Electric and gas-powered boards float over the water, just like traditional surfboards, but eFoils turn the experience up a notch by allowing you to surf above the water. They weigh between thirty-five and sixty-five pounds, and are controlled by a wireless bluetooth remote. Prices start at $5,900 and go up to around $13,900. Most of the key players on the market, however, are between the $10,000 and $12,000 marks. 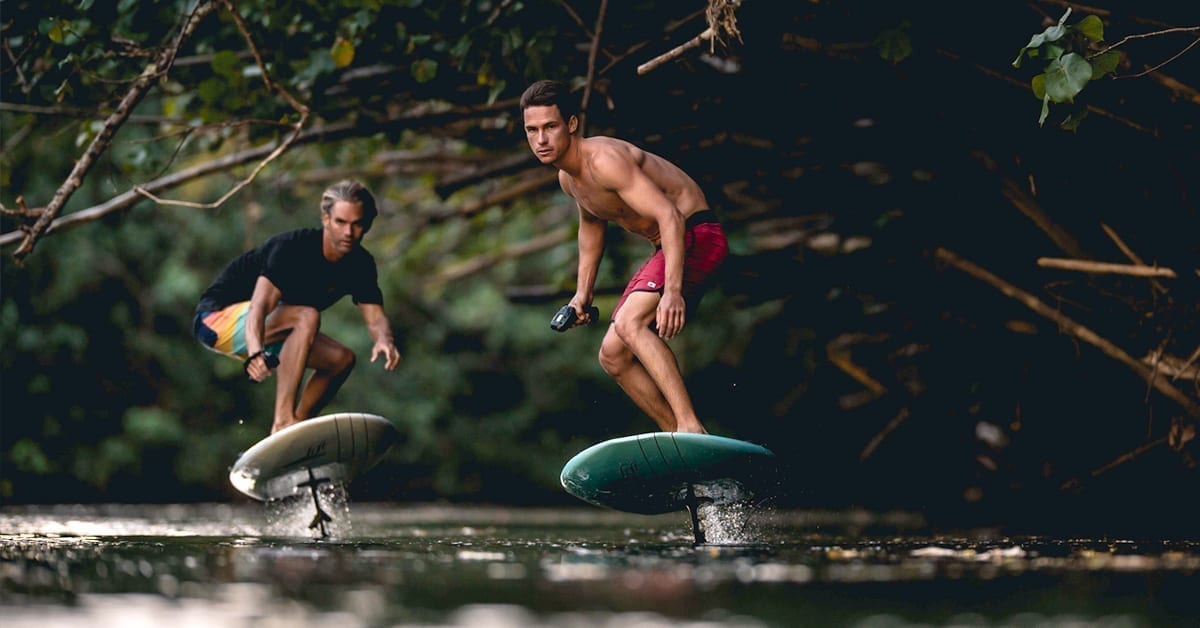 Part II: How do the experiences of powered surfing and eFoiling compare?

As with all water sports, the powered surfing option that you choose depends on what you’re looking to get out of the experience. On the most basic level, all three of these inventions allow you to explore previously inaccessible places on a surfboard: lakes, canals, and waveless oceans, working as a sort of hybrid between a board and a boat (or a jetski). Gas surfboards are lighter than electric surfboards, can reach higher speeds faster, and allow for a longer ride before refueling. On the flip side, however, they are noisier, less eco-friendly, and factor in the expense of gas. There is a wide range of board models available, from more user-friendly sports models all the way through to the exclusive race models, and this choice, of course, also alters the user experience. The good people at e-surfer have made charts comparing all the major players making both gas surfboards and electric surfboards. If you’re interested in investing in one of those, that’s a good place to learn where to start looking.

The eFoil provides a similar experience to the other motorized surfboards but as we mentioned before, it comes with the added bonus of allowing you to fly over the water. When the board is going fast enough and the majority of your weight is on the back of the board, the board lifts up out of the water so that you’re gliding balanced only on the foil. This makes for an exceptionally weightless and agile ride that not only allows you to explore places you could not explore before, but also to ride new waves in ways that you couldn’t with any traditional surfboard, motorized or otherwise.

The eFoil also comes in a variety of models and sizes to be able to accommodate all levels of athletic expertise. It is also easily disassembled and reassembled so that the toy itself is a lot more portable and storable than the other contenders in the powered surfboard field. The length of the ride depends on your body weight, but on average you can get around an hour of flight time before you need to recharge (a full recharge takes about two hours).

A brief aside: if by this point we sound a little biased, it’s because we are. The eFoil is our baby. We’ve basically dedicated the last decade of our lives to creating it, so the fact that it’s gone from idea, to prototype, and into full production is still something that blows our minds and that we’re excited about sharing…

Here’s who we are:

Lift was started by father and son team Micheal and Nick Leason out of their hometown of Isabella, Puerto Rico. Michael, a lifelong avid water and snow adventurer, instilled this passion in his kids from the time they could walk, and when Nick was done studying engineering in college, he knew that the only thing he could do was combine his addiction to the water with his new found knowledge. Having been especially impressed by a video of Laird Hamilton foiling on massive waves, he set out to invent something that could somehow make that professional sport more accessible. After a lot of trial and error, he was finally able to come up with a prototype that worked and that eventually convinced the best and brightest from both the design and technology worlds to come on board.

The team that’s building Lift’s battery packs counts with engineers coming from the most advanced motor vehicle companies (think places like Tesla). Along with many professionals in their field, they’ve been able to create an increase in power in smaller battery packs that allow you to go as far and as fast as larger batteries. The team is also always working on how to optimize the estimated lifetime and fuel gauge of the packs, creating software programmable systems that can be updated and upgraded, regardless of when you made your purchase. Safety is always their number one priority, but speed and smoothness are never far behind.

The design team is also made up of people who have surfing in their DNA, including legendary shaper Sean Ordoñez. Everyone that’s making our parts is riding our parts so they know what it means to get things just right. The carbon fiber construction of our boards is lightweight, but it is still durable enough for years of heavy use. Our wings and masts maximize control and stability while minimizing unnecessary drag. Our motor is sleek and hydrodynamic, with minimal mechanical components that result in maximum torque. And well, we could go on forever, but the important takeaway is that every single little part of what we’re selling, we’re obsessing over.

Perhaps the most important part of the Lift story is precisely this obsession for fine-tuning which has become such an integral part of our surfing addiction. We created this product, first and foremost, because we imagined it would feel incredible to use it and when we finally proved ourselves right we really wanted to share that with as many people as possible. To date, we’ve sold thousands of boards to people all over the world, people who we encourage to stay in constant touch with us because we always want to be improving our product by incorporating users’ feedback. We’ve also grown our affiliate program to include over a hundred locations. People not only want to ride our boards, they also want to rent and sell them. There’s nothing more gratifying to us than that. We think of the entire community like family and try to make that felt with our really prioritized customer care program. We’re making things we’re using, so if you’re using them, and engaging with us, you’re part of our creative process, too. It’s always been this symbiotic at our company, and we don’t intend to stop now. Everyone that signs on by becoming an eFoiler, signs on to a never-ending quest for more advances, new products, new ways to fill the unfillable water adventure void.

So, yeah, what can we tell you? We like eFoiling. A lot. But the best way to know whether it’s right for you is to try it for yourself. Our demo locations are all over the world and all our instructors are trained to guarantee that you’ll be up and riding in thirty minutes, regardless of your level of expertise. Gas surfboards and electric surfboards are also awesome. They’re bigger and they go faster. But just remember: eFoiling is surfing AND flying, the highest evolution of surfing, and if you ask us, the closest we’ve gotten to the future. For true surf addicts, there’s nothing that compares to the feeling of endlessness that comes over you when you try this magic.

Learn more about the Lift eFoil. 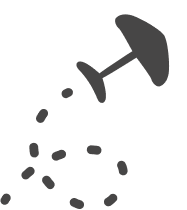 Login first to save cart
戻る